Musica a Palazzo is essentially a way to see intimate operatic performances for less than opera prices. Not only is it affordable and abounding with insane talent from the performers, it takes place in a Venetian palace.

The performances occur in various rooms of the Palazzo Barbarigo Minotto. This aristocratic residence of the past is tucked away canal-side within the San Marco neighborhood of Venice. It doesn’t look like much from the outside. In fact, you should plan on arriving early just to find the right building. This may be your only signal:

But once you step inside, you step into a beautiful Baroque scene of antiquity…

The Wedding Therapist and I came here for a special abridged performance of La Traviata. (This is another added benefit of Musica a Palazzo by the way: the fact that performances are shorter than conventional opera). Each act takes place in a separate room. Our performance consisted of approximately 25 audience members, 3 singers, 3 strings players, and a pianist. Despite the small gathering, the performance had almost all the power and emotion of the original work. The overture led straight into Libbiamo dei calici, followed by a wealth of unbelievable vocal solos and arias. The singers brought about a cyclone of cathartic misery and drama in the most beautiful tones. We experienced La Traviata as we never have before (we’ve only studied it in music school and casually listened to recordings). It was a perfect event for getting to know Venice at its core.

Not only did Musica a Palazzo enculture us and leave me full of tears, they hooked us up with sparkling wine as well.

Some tips for experiencing Musica a Palazzo

Venice is saturated with historical architecture and design. Every street is picturesque and visually stunning, regardless of the time of day. Between the seafood lunches and our peaceful gondola ride, I contemplated our privileges and the relativity of beauty. What I witness with my eyes, another tastes from a spring.

As our time in Venezia came to a close, we drank our final vin brulé. I listened to music on the train and remembered watching stars in Sedona (Arizona). I recalled the experiences that led to my life with my wife, and imagined what will follow. I visualized her hands, old and aged, and thought of how beautiful she will always be to me.

I’ve eaten some weird things here and abroad. I’ve downed raw shrimp in Mexico 🇲🇽…twice (one time didn’t end up so hot). I’ve had tequila shots with mayonnaise in it. I’ve eaten beef tongue tacos. One time, I even ate sushi from a college campus dining hall 😉

Nothing has compared in exquisiteness and delectability to donkey meat. Only slightly gamey, the meat is tender and delicious. I enjoyed it over some Italian bigoli (wide noodles). 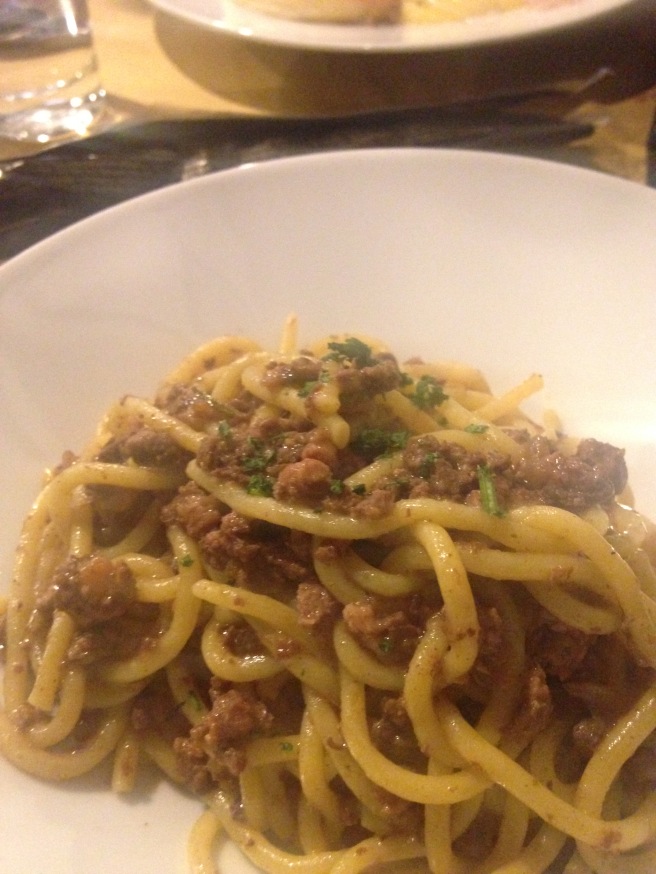 First of all, you virtually can’t go wrong with any dish at a decent restaurant in Italy 🇭🇺. The ingredients are incredibly fresh wherever you go, and the chefs inherit a sense of pride that spans across countless generations. You may experience more conventional dishes like the one pictured here:

As for the donkey meat, there are a couple of reasons you should try it.

I do suggest that you work to find meat suppliers that support humane practices toward livestock. I actually eat meat very rarely, and try to limit my consumption in respect toward the animals. You are free to do as you wish, but it’s good to be mindful in every domain of life.

The bigoli al ragù d’asino dish pictured above was enjoyed with a carafe of wine at Osteria al Duomo in Verona, Italy. The restaurant is named so because of its close vicinity to il Duomo di Verona (Verona Cathedral). The cathedral is a must-see site in Verona. Here’s why: 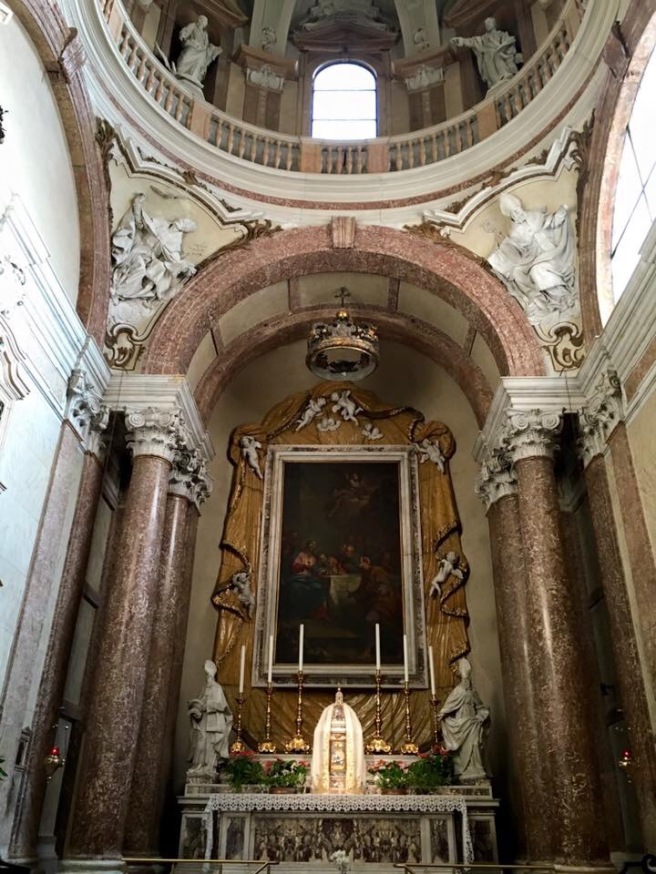 The cathedral has been in existence since 1187 and features stunning work later added by artist Sanmicheli. In the present day, the cathedral is surrounded by incomprehensible quantities of delicious food.

Be healthy, be happy, and salut!

In Assisi, Italy, there’s a destination that isn’t listed in any of the tourist books. It is virtually unknown, but ironically lies in the tourist information “office” of the Assisi train station. It is the imagination playground of Roberto Mazzeo.  Here he is, pontificating on angels, his theater troupe, the sanctity of brotherhood, and how utterly crazy he himself is:

He co-leads a theater production called “Il Teatro dei Mutaforma” (The Theater of Shapeshifters is a rough translation). The rock musical involves Saint Francis as a shape-shifting alien that eats magic mushrooms and promotes peace in the world. Mazzeo loves to go on tangents, and speaks extensively on existentialism and spirituality. His discourses are filled with clichés, like how the modern man lives as a “zohmbee” and that we are all sacred. But what is magical about Roberto Mazzeo and his studio is his infectious energy and the distinct creativity he displays.

When you walk past the tourist information desk littered with maps and guides, Roberto’s color pencil mural hangs proudly on the wall. 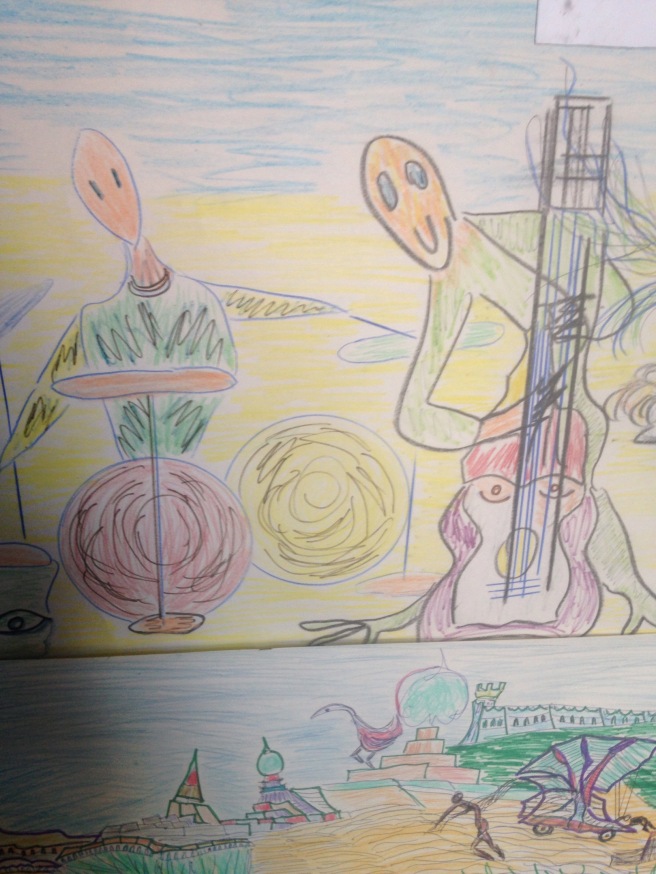 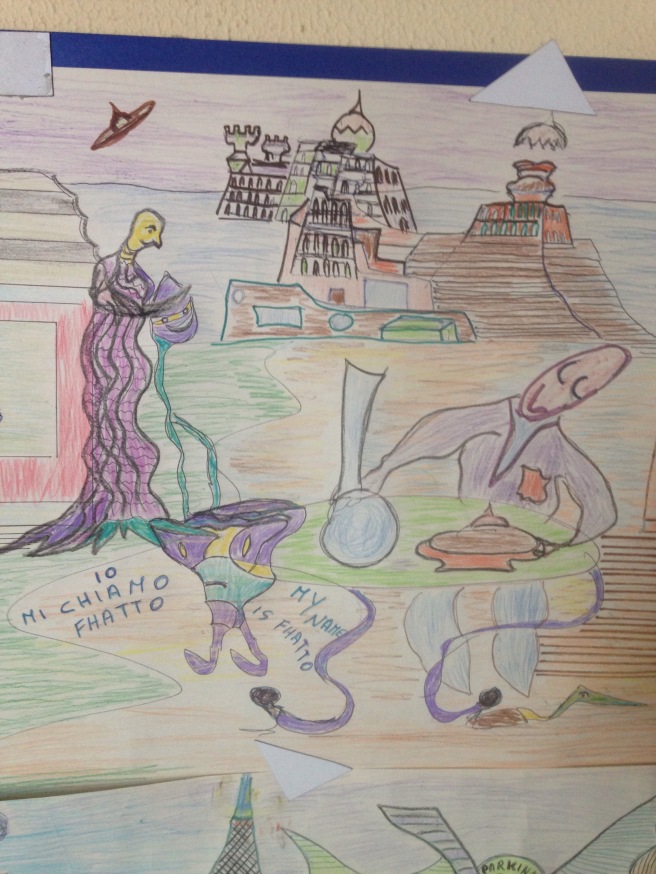 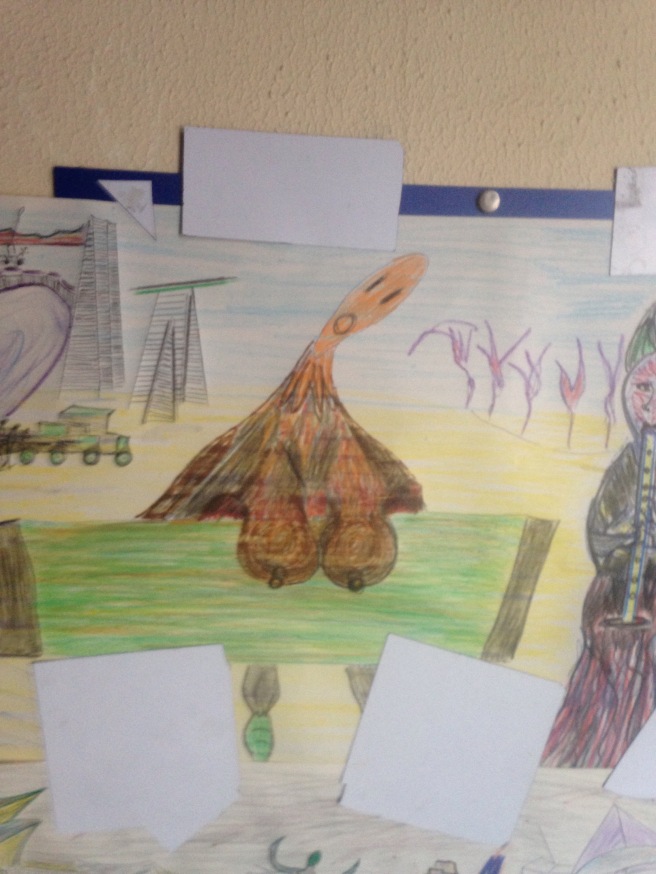 Yes, that is an alien with a big, sagging pair of tits. Roberto made an emphatic point to highlight this.

While we took the informal tour, space rock/electronic free jazz music played out of a speaker on the wall. I had no idea if this was Roberto’s work or inspiration, but it was fascinating. He talked about how he respects children for their energy and spontaneity. His studio had many toys and children activities around it, but no children because it was cold in December.

And above this table was an impressive dinosaur creation made of plastic hoses and pipes:

Mazzeo told us he gave up his life of prosperity and comfort for a spiritually rich life (sound familiar?). He talked about how he admires St. Francis because “he cray-zee like me.” I asked him if he talks to birds, and he laughed vivaciously. He then took a seriousness in how he does indeed commune with animals in the wild. It seems crazy, but you start to understand after spending some time in Assisi. Here is one of the many spectacular views:

I bought Mazzeo’s book, even though my Italian is pretty elementary. On the back, it reads in Italian, everyone has a guardian angel. Under this statement is a coyote cartoon that says, “mine is drugs.” It’s a perfect example of Mazzeo’s combination of humor, spirituality, and outlandishness. He describes himself as a Buddhist with St. Francis’ craziness. He talked about spending much of his life in Africa and Europe, at one point singing with Freddie Mercury. Anything he tells about himself may be fact or fiction, but it all gives bright color to the aging station. Mazzeo has much to give with his monologues and artistic presentation, and the best way to give back is with your time and attention. If you have an affinity for the bizarre, it is worth every minute.

Follow Harmony and the Many Places You'll Go on WordPress.com